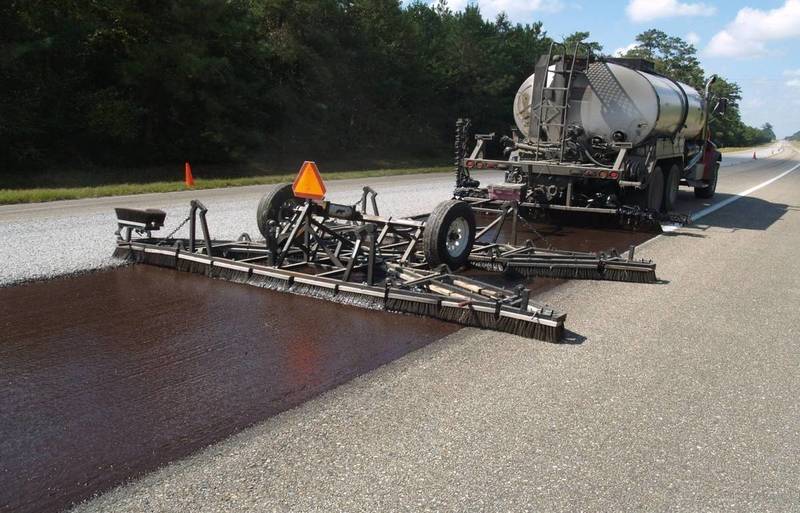 The “scrub seal” is a typically American technique; it is similar to that of surface dressing in that it involves spreading an emulsion and then gravel on an existing pavement. However, it differs from this technique in that the emulsion is applied by a series of brushes arranged at specific angles, thus leading the emulsion to the pavement’s damage.

As a result, scrub seals are particularly suitable for heavily cracked substrates; the cracks are thus sealed and the waterproofing of the pavement restored.

The “fog seal” takes its name from the fact that it consists of spreading a veil of emulsion on an existing bituminous surface with degradations linked to the oxidation of the bitumen, such as narrow cracks. The spread emulsion also restores flexibility to the bitumen that has hardened over time.
The fog seal is also particularly suitable for surfaces with a low bitumen content, which can lead to occasional chipping. Finally, it gives the treated surface a uniform appearance and improves its watertightness.

The emulsion used is formulated from a bitumen with a consistency adapted to that of the surface; when the surface bitumen is particularly oxidised, a regenerating agent is added.

The emulsion is spread by means of a conventional spreader. It can be followed by light sandblasting to preserve the adhesion of the treated surface. In some processes, the sand is pre-mixed with the emulsion, the whole being applied homogeneously.